Every new day carries with it a string of unanswered questions and decisions to be made that will positively or negatively affect our future.

Over time, we become consumed with “should haves” from the past and “should I’s” for the future.

‘I should have chosen a different career path…maybe then I’d be more successful. I should have never dated her/him… If I didn’t, I wouldn’t feel so lost now. Maybe I should have drank less in college and applied myself. Should I get out of bed today, or roll over and enjoy the little comfort I do have? Should I try to find my passion, or just continue going through the motions and surviving?

We become consumed with ‘shoulding’ all over ourselves...

Yes, you read that right. ‘Shoulding’ all over yourself is the act of living entirely in the past, beating yourself up for wrong turns you made along the way. This act only harms our ability to grow into the person we want to be. We all have moments in the past we are not proud of, but it is what we do with our ‘now’ that will define our future.

What if I told you that you’re not the only one fighting a battle today? What if I went even further to tell you that behind every successful person there are many unsuccessful years filled with struggle, failure, and the same ‘should haves’ that we’re fighting today?

Would you believe me? Or would you think I was just “that guy” trying to be inspiring and tell you there is light at the end of the tunnel? Well, why don’t we let you be the judge?

Once upon a time, there was a young girl born into poverty in rural Mississippi to a 13-year-old single mother. That young girl was later molested during her childhood and became pregnant at 14, only to lose her child in infancy. After surviving a tough childhood, she packed bags in a grocery store to put herself through college. Then, in her 20’s, she was fired from her job hosting the 6 p.m. news slot at Baltimore’s WJZ-TV in 1977. She went on record to say, “I had no idea what I was in for or that this was going to be the greatest growing period of my adult life.” (Baltimore Sun). Fast-forward to now –  that same ‘girl’ is known as, “The Queen of Daytime Television” while being one of the greatest philanthropists in American History and labeled as the most influential woman in the world. Yes, her name is Oprah Winfrey (probably our next President).

Meanwhile, over in Dallas, there was a 25-year-old bartender who had just graduated from Indiana University and was trying to find his place in the world. He found himself, “sleeping on the floor with six guys in a three-bedroom apartment,” (How To Win at the Sport of Business). After moving on from his dead-end bartending job, he took a sales job at a PC software retailer. He was soon fired after meeting with a client trying to close a deal instead of opening the store. He later revealed that he used to drive around looking at big houses, imagining what it would be like to live in them and used that as his motivation.  Fast-forward to now – that struggling bartender has a net worth of over $3 Billion and spends his nights watching the Dallas Mavericks from the owner’s box. Yes, indeed, he is our favorite Shark, Mark Cuban.

Still not convinced? Alright, well, have you done any online shopping lately? I bet you didn’t know that it was a McDonald’s ‘grill man’ by the name of Jeff Bezos who would go on to be the Founder of Amazon and worth around $90 Billion today. Oh, and did you happen to do that shopping on a Mac? Whether you love him or hate him, you should without a doubt respect the genius of Steve Jobs who altered the course of mainstream computing. He went from being put up for adoption at birth and later dropping out of college, to pioneering the microcomputer and having a net worth exceeding $10 Billion. So, what do these remarkable humans have in common? Perseverance…or, as I like to call it, ‘Weathering the Shit Storm.’ They believed in themselves enough to overcome adversity and persevere into living a successful, peaceful, and purpose-filled life.

This world is full of shit storms. I believe we, at one point or another, walk directly into the storm of our lives and we are certainly not prepared for it. Clouds settle in and the next steps are uncertain. The road has narrowed, and the vision becomes foggy and unclear.

When we’re young, the vision is clear and anything is possible. We believe in our dreams and embrace the future. We’re happy (usually), full of life and ambitious to conquer the world.

As time passes, self-doubt creeps in, and the negative force of the world tilts us from pursuing our dreams. Soon enough, we are forced to abide by the rules society has laid out for us. It becomes ‘uncommon’ or ‘uncool’ to reveal our emotions and free our inner child when something good (or bad) happens.

Over time, we conform.

We become depressed, deserted, and full of uncertainty. We try motivating and pulling ourselves out of whatever hole we fell in, only to slip deeper and deeper into our failures. We have tried wholeheartedly to make everyone else happy but, in turn, find ourselves lost and desperate for approval. We are full of disbelief and have all but forgotten what it means to be at peace.

Peace, by definition, is: “quiet and tranquility, freedom from disturbance,” and it is something I struggled to find for a very long time. The hardest part of growing up and becoming the person we want to be is that no one is preparing us for the storms we encounter along the way.

Sometimes, to find who we are we must lose who we were.

A quest, by definition, is: “a long or arduous search for something.” My quest is not nearly as simplistic as that. Yes, it does indeed have a beginning, however not yet an end – and it is the in between that defines who I am today and who I will be when the end comes. It has, without a doubt, been long and grueling but I have finally begun to find what it is I’ve been searching for… inner peace.

I believe that inner peace is the new success in the world we live in today. All of us are struggling between the kid we used to be and the adult we’d like to be. We all deserve to be happy and live the life we were destined to live – not ‘floating around accidental-like on a breeze’ as Forrest Gump would say.

Contrary to popular belief, our biggest advantage is our youth. We’re not lost in life, we’re just early in the process. We’re too hard on ourselves in our own minds to have it all figured out. We need to take what life is giving us and learn how to apply it to what we actually want later on.

Once you realize that, the lightbulb turns on. It’s like Lindsay Lohan walked in and said, “the limit does not exist.” You need to understand that success can and will be achieved by trusting in yourself to do exactly what you were put on this earth to do.

There’s a difference between wishing to be successful and knowing. Those who wish for success, do not truly believe they are capable of achieving it. Those who know, commit to their own definition of success and are relentless in attaining it.

The true life test is defining your own meaning of success, and walking the narrow path you’ve paved for yourself to get there.

A good start to achieving success is to stop shoulding all over yourself. After all, you’re only human… 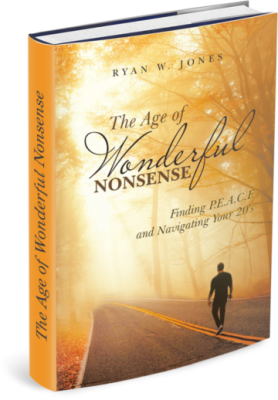